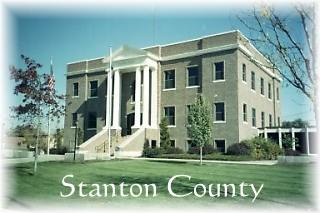 Stanton County was established in 1873 and named after Edward McMaster Stanton who served as Secretary of War under Presidents Lincoln and Johnson.

The future looked bright for Stanton County residents as they moved into the 1930's. Postwar prosperity and high grain prices had encouraged farmers to add land and purchase equipment that would allow them to farm every available acre. The town enjoyed a building boom that resulted from the Santa Fe railway bringing goods and people into the community. Johnson built a new high school, put up a new water tower, and was building a new power plant. Manter was a thriving town with a railroad depot, several shops, lumber yards, and other businesses. Big Bow, another railroad town, was named after an Indian chief. Within the county, community organizations flourished and the people of Johnson, Manter, and Big Bow greeted the 1930's with optimism as they were poised for growth and prosperity.

The realities of the stock market crash and the ensuing economic depression had yet to hit home for most Stanton County farmers as they were cutting record wheat crops and expecting high prices for their wheat in 1931. Farmers were in for a surprise as tough economic conditions nationwide and the record bushels of wheat for sale combined to make the bottom drop out of the market. Soon farmers were struggling to make equipment and mortgage payments. There was little for most farmers to do but to hold on and hope for the best and pray that next year would be better.

Just when farmers thought it couldn't get any worse, it did: