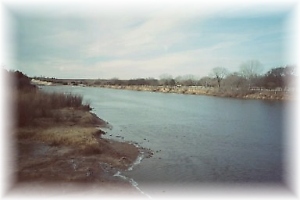 Rock hounds can dig for the hour glass shaped Selenite Crystal found only at the Crystal area on the Salt Plains Refuge.

Fish for catfish, saugeye or other finned creatures at the Great Salt Plains Lake or visit the Byron state Fish Hatchery and Watchable Wildlife Area to see some of the fingerlings that stock Oklahoma's Lakes.

The area is a hunters paradise. quail, pheasant, turkey, goose, deer and other wildlife are plentiful throughout the area.

Gardeners can stroll the gardens of the Heritage Manor Bed and Breakfast, near Aline, or take the Cherokee Water Gardens Tour.

Learn the history of the area at the Alfalfa County Museum in Cherokee, and see how early settlers lived in the only remaining sod house in Oklahoma built by a homesteader in Aline.

During the 1893 Land Run into the Cherokee Outlet, the present county at that time was among six counties designated by the alphabet letters K through Q. County M became Woods County. Then, at the 1907 Statehood Convention, Woods County was divided into three counties, which were given the names of Woods, Major, and Alfalfa.

Alfalfa County was named after Alfalfa Bill Murray, president of the Constitutional Convention and later Governor of the state.

The Alfalfa County Museum occupies the 1929 National Historic Cherokee Hotel, that to this day is the tallest four story building in Alfalfa County. Currently the museum'

The salt plains are a unique geological area. Visitors may enjoy viewing the near perfectly flat 11,000-acre barren area with the wafer thin salt crust or dig for the Famous Salt Plains selenite crystals with the hour-glass sand inclusion.

The beautiful United Methodist Church of Cherokee was built in 1918

Salt Plains was established in 1930 "as a refuge and breeding ground for birds." It provides habitat for approximately 300 species of birds and 30 species of mammals. The 32,030 acres is divided into almost equal parts of nonvegetated salt flat, open water, and vegetated land (

The Cherokee Strip Centennial Wall is inlaid with bricks etched with names commemorating the first homesteaders and pioneers who settled this area during the 1893 Land Run and contributed to the growth of our city.

An ever-flowing "Artesian well" spring is located northeast of Cherokee, Oklahoma, and provides a cool drink for travelers and a "fill-your-own-container" source of water for many homes of the area. In 2003

The Alfalfa County Courthouse was built in 1921

In 1929, the Oklahoma Department of Wildlife Conservation established Byron State Fish Hatchery to produce sportfish for statewide distribution. This is the only jar culture hatchery in the state, producing 25 - 30 million fish a year. Besides raising sportfish, the hatchery'

Located in the Cherokee Cemetery is a distinguishable memorial marker to James Potts, an early day cowboy who was shot by his friend in a gun duel in 1884

Major George C. Sibley, Indain agent from Fort Osage, Missouri, was the first white man to view the Salt Flats. He led an expedition to the Flats in the summer of 1811