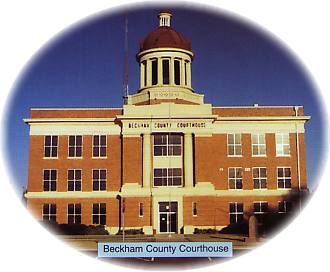 If you're inclined to vacation by canoe, you could travel the waters of the North Fork of the Red River from north to south, or if you prefer the paved route, old Route 66, now portions claimed as Interstate Highway 40, will take you east or west through Beckham County and some of its towns still reminiscent of those scenic '66 days.

Beckham County lies on the southwesternmost boundary of Oklahoma along the 100th Meridian, the historic line determining the Louisiana Purchase, issues of slavery, and claims of Texas Territory. The county used to be part of Greer County, Texas until Texas agreed that it and four surrounding counties would belong to Oklahoma. Over the years, the 100th meridian has been surveyed eight times, resulting in some people living in both Texas and Oklahoma without ever having moved! History of the 100th Meridian can best be explored at the 100th Meridian Museum in Erick.

Route 66 will take you through Elk City with the world's largest drilling rig, to Sayre with the "Hollywood" Courthouse, on to Erick, the home of country singer, Roger Miller, and just at the 100th Meridian, the nearly vanished town of Texola featuring an old 1910 stone jail.

The Shortgrass Country Museum is one of the important historical landmarks of Sayre. In 1930 the Rock Island Depot was moved from its original site to the center of downtown.

Relive the days when the Railroads brought us everything from soup to hay. Experience the entertainment of twelve model trains running at the same time, different gauges, and over 350 feet of track! See over 100 trains beautifully displayed and lots of memorabilia. Over 30

Displayed on the lobby wall of the art deco post office is a WPA commissioned mural capturing a moment of the infamous Oklahoma Land Run. - Artist, Vance Kirkland, 1940

The Old Town Museum complex is the steward for the present generation in preserving those moments of life experienced in settings like the interior of the Rock Bluff School, the Pioneer Chapel and early day pioneer doctor'

The impressive Beckham County Courthouse was built in 1911. If you have watched the movie, "The Grapes of Wrath," it may look familiar to you. It appeared in the brief 30-second montage of shots depicting the beginning of the Joad family's westward journey along Oklahoma Route 66