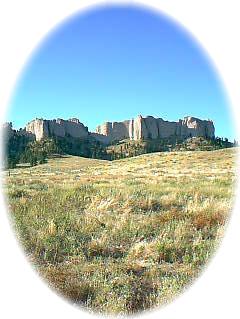 Dawes County is part of the Pine Ridge which extends in a ragged arc across 100 miles of Northwest Nebraska and marks the northern boundary of the High Plains. Rising 1000 feet above the White River Valley, the spectacular scenery includes high, white cliffs and rugged buttes. The 25-mile Pine Ridge Trail provides spectacular sightseeing trails among the pine-clad hills and buttes. Containing over 145,000 acres of public land, this area is popular for hunting, hiking, and biking.

This area was a favorite Indian hunting and camping area for hundreds of years and the Sioux Indians occupied it permanently about 1810. Spaniards from New Mexico were the first fur traders, followed in the 1830s by Americans from St. Louis, who established a regular trail from Fort Laramie to Fort Pierre on the Missouri River.

In the 1840s there were two competing fur posts, one on Chadron Creek, about 8 miles south of Chadron, the other on Bordeaux Creek, about 3 1/2 miles east of Chadron.

In 1872-1873, two Indian agencies were established on the White River in what is now Dawes County. Fort Robinson was built to protect the Red Cloud Agency, and played an important role in the Indian Wars of the 1870s. Sioux War Chief Crazy Horse was killed there in 1877.

Camp Sheridan was established in what is now Sheridan County in 1874 to protect the Spotted Tail Agency. It was abandoned and dismantled in 1881, but the site is easily accessible.

With the removal of the Sioux Indians to South Dakota in 1877, several very large cattle outfits came into the area. Large roundups were conducted annually until the railroads arrived in 1885 and an influx of homesteaders took up most of the available land. Dawes is still cattle country and very much reflects its heritage of Indians, fur traders, cowboys, and frontier soldiers. The buffalo herd at Fort Robinson State Park is a reminder of Northwest Nebraska's vivid history.

Pine Ridge beckons to those who love a dramatic, mystical landscape with a past to match. The terrain will test the skills of backpackers and hikers of every level. Developed horse trails, lakes, streams and rivers, and camping areas help you to meet Mother Nature up close and personal. Study the most fascinating sagas of the Old West, carefully preserved in museums and other attractions. Get in touch with historic figures of the past like General Crook, Walter Reed, Crazy Horse, and Chief Red Cloud. Or delve further back into history by exploring the fossil beds, geological strata, and other archeological finds of the area's prehistoric past. Rock collectors visit the area seeking Fairburn and Nebraska Blue Agate. Fort Robinson State Park is a favorite with visitors for its unique summer activities.