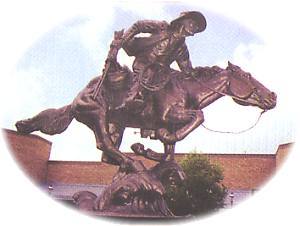 At straight-up noon on September 16, 1893, a gunshot punctuated the excitement as thousands of men, women, and children began their run into the Cherokee Strip. Over 100,000 people entered from all four boundaries of the strip on horseback, on foot, by train, wagon, and bicycle - all seeking a new life on the frontier.

About 20,000 of these people settled in what was to be designated "O" County. "O" County was provided with a county seat reserve of 320 acres, a plot of four acres for a courthouse, and one acre for a government land office. The county seat was Enid and eventually the county name was selected by popular vote to honor James A. Garfield, twentieth President of the United States.

If you are fascinated by trains, you will like the Railroad Museum of Oklahoma. Within the museum compound, there are six cabooses from railroads that have served Enid (Union Pacific, BNSF, Grain Belt), a baggage car, motor cars, a three-dome tank car, and a 50-ton engine.

Enid has plenty of facilities for community and family events.

Cherokee Strip Conference Center is one of Oklahoma'

Enid has a winery too. The Robert Bartunek Winery offers vineyard tours and an opportunity to learn how wine is made.