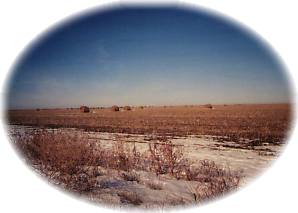 Greeley County is situated in the center of the state, North and South and bounded on the West by Colorado, an area known as ?The High Plains, Short Grass, or Ever Prevailing Winds.?

Greeley was the last county in Kansas to be organized, and is the smallest county per population. Town companies organized other towns namely: Hector, said to have been named after Horace Greeley?s dog, also Greeley Center, Horace, Colokan and Reid, which were in contention and rival for the county seat. Today, Greeley County has two towns - Tribune and Horace

The first settlers, a colony from Harper County, came in November 1885. Civil War soldiers were given the opportunity by the government to file claims, mainly in the western part of Greeley County. Thus several, some with families, arrived in Greeley County in early 1887. Five girls came to western Kansas to make claims. These girls had a dug out built which they named ?Palace Hotel?; they cooked for the ?boys? who were also filing on claims.

Western Kansas has always had its share of natural disasters. One blizzard that is

Wild Horse Corral - In early days, wild horses were grazing on the prairie and often times driven into this native stone cave and captured. Located in northwest Greeley County.

(transcribed from correspondence to Museum Curator) - ... about the sword. I carried that thing to about every so-called expert in the country. When Barbara went to Spain a complete set of photos and detailed descriptions went with her. As far as the Smithsonian is concerned, their "experts"

Tribune Parks Tribune’s four parks are inviting to the public and appealing to the eye. Holland Park offers an outdoor basketball court and an enclosed area for playground equipment especially designed for infants to children age 5.