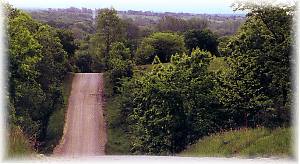 Jackson, under the old name of Calhoun, was one of the thirty-three counties established by the first Territorial Legislature at its session in 1855 at the Shawnee School in Johnson County.

A Sears Roebuck and Co. concrete block house was featured in the 1908 General Catalog for $1,995.00. That amount allowed for paid labor for assembling the house. The concrete blocks were made on site with a Wizard of Buckeye Concrete Block Machine which were sold in the same catalog.

The Jackson County Courthouse, built in 1920, is the centerpiece of the courtyard and the downtown business community.

Having a crown spread of over 93 feet, this 200-plus year old, Burr Oak tree is one of the largest in Kansas. Searle's Oak was donated to the city of Holton in 1992, at the time being the 11th largest Burr Oak in Kansas. The estimated planting time was between 1792 and 1817.

Built in 1936 as a WPA project, Holton's municipal pool is one of largest in the midwest with a 385,000 gallon pool. The pool underwent complete renovation in 1985, incorporating state-of-the-art health and safety technology.

Originally built in 1889 and destroyed by fire twice, the present building was rebuilt in 1906 and is registered on the National Historic Register.

This 535-Acre reservoir serves as a flood control structure and water supply for the City of Holton and rural water district No. 3. As you enjoy these recreational facilities, please help us to protect, preserve and enhance the water quality.