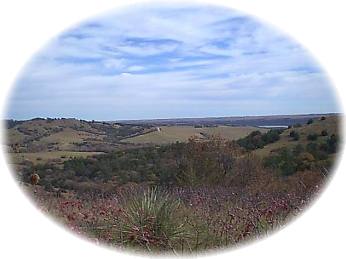 Frequently described as "the best kept secret in the west," this amiable community of cattle ranchers and farmers still conveys a hint of the Old West, as it clings to life through the sacrifices of those courageous hearts of long ago. From town to countryside, old ways and old things still prevail. Ironically, a century's surge of hostilities, and economic disasters have hardly changed the landscape or the people of this last frontier.

Keyapaha Wapka - (Lakota Indian name) meaning Turtle Hill River, fittingly characterizes much of this country. With its 60 mile southern border fronting the sparkling Niobrara River, this charming area well commands the title of "The Northern Gateway to the 20,000 square miles that comprise the great Nebraska Sandhills and the Niobrara Valley.

These majestically formed hills from their oval tops to the depths of their famous reservoirs below, portray a geographic phenomenon - 13,000 years in the making. One could describe much of the terrain of Keya Paha County as likened to thousands of grass-covered rolling dunes, that stretch endlessly across the horizon, giving the appearance of a giant slalom course, custom-designed for the prized herds of Black Angus and White-faced Herefords that polkadot the landscape.

As an added attraction, this scenario is complemented by man's ability to seasonally decorate the rich, flat lands of this area with patches of brilliant sunflowers, rolled haystacks, and rows of nodding corn; their quality being guaranteed by a massive network of pivot irrigation systems that are fed by the world's largest aquifer, the Ogallala.

These beautiful canyons, valleys and prairie scenes dotted with hundreds of churning windmills haven't changed in a century or more. Although the buffalo have been replaced with massive numbers of cattle, the deer, antelope, flocks of wild turkey and pheasant still dodge their predators by finding safety amongst the bluestem grasses, groves of wild sunflower and black-eyed susan.

In the early years, Keya Paha County had 13 bustling communities. Today, all of these, except for Springview, the county seat, and the small town of Mills are now ghost towns. These lonely spots, with their remnants of yesteryear lay hidden in the depths of the tall prairie grasses and cedar groves; but for now, these abandoned sites add intrigue and excitement for those searching for fun and adventure - a boon to history buffs.

The Keya Paha Historical Society welcomes you to experience 100 years of County history come to life, by beginning your visit at this unique museum in Springview. Here, inquire about guided tours, lectures, and historical events of the county.

The building, listed on the

In 1922 Keya Paha County Commissioners and representatives from Tripp County, South Dakota, awarded a contract to the Standard Bridge Company to erect a two-span pony truss structure, supported by a steel pile

The American Legion was instrumental in erecting a beautiful memorial for veterans serving in World War II, Korean, Vietnam and Lebanon/Granada/Panama/