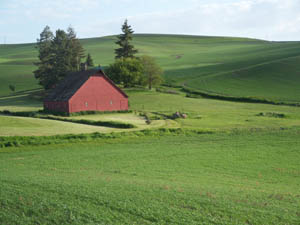 Latah County is located in the northern Idaho panhandle; to the immediate west lies Whitman County, Washington. These counties are referred to as "the Palouse," which produces a large share of the wheat, lentils, peas, oats and barley in the United States. The Palouse is home to two major universities, University of Idaho and Washington State University. Latah County incorporated cities include Bovill, Deary, Genesee, Juliaetta, Kendrick, Moscow, Onaway, Potlatch and Troy. Our unincorporated communities are Avon, Cedar Creek, Farmington, Harvard, Helmer, Howell, Joel, Princeton and Viola.

First built in 1890 by the Northern Pacific Railway, the Kendrick Historic Depot is the only remaining depot of its kind of the total of 34 built in WA, ID, OR, MT and ND using the Standard 1890

We currently do not have any events for Latah County, Idaho in our database. If you know of events taking place, please add the event
.