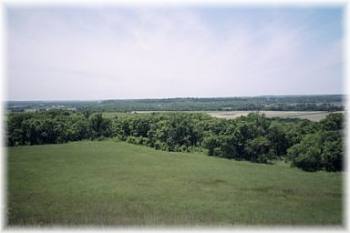 Historically, Riley County was one of the first 36 counties organized by the first Kansas Territorial Legislature in 1855. Its boundaries have been changed many times, but since its1886 platte, it is distinctly noticeable as Kansas' most irregular shape having its long, eastern border defined by the Big Blue River. Its earliest colony was settled by the New England Emigrant Aid Society selecting the townsite of Manhattan in 1855. The county was named in honor of Major Bennett Riley who commanded the first military escort on the Santa Fe Trail in 1829. Fort Riley, established at the junction of the Republican and Smoky Rivers, was named in his honor in 1853.


Today, Riley County still carries the history of its earliest settlers in the amazing limestone buildings, homes, and churches throughout the county. It is the home of Kansas State University academic excellence and Big 12 athletics. Tuttle Creek Reservoir, the state's second largest reservoir offers endless outdoor recreation opportunities. Fort Riley Military Reservation occupies a vast number of acres in the western portion of the county where active military training is carried on daily as well as offering public availability to the historic buildings within the fort.

The Wolf Butterfield House served as a way station for the Butterfield Stage Line started by David Butterfield in 1865. The limestone house contained dining and sleeping faciltities as well as a tavern for stage line patrons.

State Fishing Lake No. 2.is located about four miles northeast of Manhattan. Pottawatomie Lake #2 is a scenic lake of about 75 acres that holds nice populations of crappie, largemouth bass and bluegill. The lake also produces impressive strings of channel catfish and holds some very nice walleyes.

In the heart of the Flint Hills, the 8,616-acre Konza Prairie is a rare opportunity to experience the Prairie as the pioneers did during their trek westward. Once a part of the Dewey Ranch, Chicago Industrialist C.P. Dewey acquired the prairie piece by piece during the last quarter of the 1800s. <

The Marianna Kistler Beach Museum of Art offers an in-depth look at Kansas art and brings art and artists from around the world to the heart of Kansas. This 25,000 sq. ft. facility is home to KSU's permanent art collection. Since its establishment in 1928, this collection has grown to over 7,000

Listed on the National Register of Historic Places, the First National Bank was at this location from 1887 to 1912.

This building and its twin building next door were built by J.N. Limbocker and are now part of the Manhattan Town Center structure.

The pioneer museum was built in 1915 as a home and displays agricultural tool exhibits.

Harry P. Wareham moved with his family from Flush, Kansas in 1868, when he was two years old and when he was nine and his brother, William, was eleven, their father died. Mrs. Wareham, Sarah, established the Wareham Millinery Company, which she ran for many years.

The Randolph Jail is a nineteenth century jail located on the grounds of the Riley County Historical Museum. It was relocated here from the old town of Randolph in northern Riley County when the old town location was moved with the creation of Tuttle Creek Reservoir.

Listed on the National Register of Historic Places, the Carnegie Library was built in 1904 with the help of a $10,000 grant from Andrew Carnegie. The building is located just to the west of the Courthouse and now houses the county attorney's office.

Founded in 1863 as the nation's first land grant college, Kansas State University is a nationally recognized comprehensive university with more than 200 undergraduate programs, 60 master's degree programs, and 40 doctoral programs. More than 20,000 students and 1,200