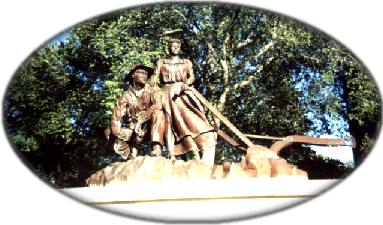 What is now Sherman County, named after General William T. Sherman, was, in its earliest history, a part of the great grazing pasture of the huge herds of American Bison, there is no evidence of Indian Settlement before white men came to settle.

Ft. Wallace, an army outpost built in the late 1800s for the protection of railroad builders and settlers against the "hostiles" is located south of Sherman County. It was the center of many battles. The buildings were constantly under repair or reconstruction because of the Indian attacks.

One such battle in the northeast corner of Sherman County, is the first recorded event in the history of the county.

It is known as the Kidder Massacre.

The early settlers in Sherman County in 1885-1886 started towns in or near the center of the county. Each of these small towns vied for the title of county seat, and now and then a 'war' developed.

The coming of the Rock Island Railroad across the center of the county had much to do with the end of the 'county seat war'.

Come and enjoy the fun for all at the Topside Territory Fantasy Playground. Sit back and relax while your children run through this amazing playground.

Find out about the history of Goodland with a tour of 36 historic homes, buildings, landmarks, stained glass and including Goodland's infamous brick streets. Some of the homes in Goodland were designed in the Queen Anne and Bungalow style of architecture. 1102

Welcome to Sugar Hills Golf Club. Enjoy the beautiful rolling hills with blue grass fairways and challenging greens. For tee times, cart rentals or any other information, contact the Club Manager at

Kansas has a unique history and no less so than Goodland and Sherman County. The High Plains Museum's collection of over 8,000 objects lets adventurers of all ages discover the past for themselves. Six HO scale dioramas tell the story of the early pioneer'

The original Carnegie Library was built in 1912, with the help of a $10,000.00 grant from philanthropist, Andrew Carnegie and is a fine example of the Italian Renaissance Revival style of architecture. For 60

Weather predictions and forecast by the latest Doppler System. One of only five in Kansas and the Tops in the United Sates.