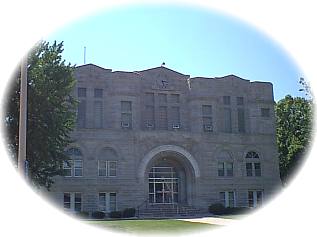 Thayer County was originally called Jefferson County and Jefferson was called Jones. They were
united in 1867 and the County Seat was at Meridian which is located near the Alexandria State
Lakes. The old Meridian School still stands and is often open to the public. This proved
unsatisfactory and the counties were redivided. This time the county east of the 6th Principal
Meridian became known as Jefferson and the original Jefferson became Thayer, named after General
John Thayer, the 7th governor of the state of Nebraska. The County Seat of Thayer became Hebron.


The free flowing springs which made The Big Sandy Crossing an important watering place on the
Oregon Trail have been converted into the Alexandria State Lakes which is a beautiful place to camp,
relax, fish and picnic. The Oregon Trail is marked by several stone markers across Thayer County.
The only raised lettered marker is located by the Catholic Cemetery south of Alexandria. Following
the Oregon trail west is a flat region between the Big Sandy Creek and the Little Blue River. This was
called 'The 18 mile ridge' by the early travelers. The people who settled in this region referred to it as
'Poverty Flats.'


Millersville or Thompson's Station was the first Pony Express Station in the county. There is a
'regulation' sized Vermont granite marker designating the location of this Pony Express station. Ezra
Meeker felt that the youth of his day in 1910 had no idea where the Oregon Trail went and he and his
dog came through the country in a covered wagon pulled by oxen inspiring people to mark the
location of the Trail in 1910-1915. The large red stone marker on highway 81 north of Hebron was the
most expensive marker put up by the Daughters of the American Revolution as a result of Mr.
Meeker’s work. A pony express reride marker is located beside this marker. More regulation sized
markers are located on the Oregon Trail. There is marker near the Kiowa Pony Express station
which was near Fort Kiowa.


Hebron’s Courthouse was built in l901 and there are 4 faces carved on the front of the building. It was
said by some that these faces were carved by Gutzon Borglum who did the presidents at Mt.
Rushmore in SD. The faces are supposed to be of 'Big Mary,' a widow, who ran a boarding and coffee
house on the west side of Hebron. Borglum, according to legend stayed at this boarding house. The
other faces are Frenchie Samoisette, the courthouse janitor, a prominent business man and Borglum
himself showing his teeth which was interpreted by some as his disdain towards the people for the
way they treated 'Big Mary.'


In 1872 the St. Joseph and Grand Island built the railroad placing towns approximately 8 miles apart
and named them alphabetically --Alexandria, Belvidere, Carleton, Davenport and on up the line. This
ABC line is now owned by the Union Pacific, has a double track and is a very busy. The Burlington
came across the southern part of the county connecting the towns of Hubbell, Chester and Byron. A
north and south branch included Bruning and Deshler.


Erasmus and Lucy Correll, who platted Hebron and started the Hebron Journal newspaper, invited
Susan B. Anthony to come to Hebron and speak for Woman’s rights to vote. Miss Anthony was
hissed and made fun of by the men. Two years later Elizabeth Cady Stanton came to Hebron for 5
days giving lectures in the evening and starting the First Women's Suffrage Association in Nebraska
on April 15, 1879 in Hebron, NE.

In World War II, the Bruniing Army Air Field was built in the northern part of Thayer county. The
449th Heavy Bomber Group had 110 B-24 planes there. They flew 63 of them from Bruning to Italy.
386 men were killed and 363 were taken Prisoners of War. P-47s fighter planes also trained here.
After the Base was closed as an Army field it remained open as a State of Nebraska Air Field.
During that time 'Ed' Yost. the 'father of modern Hot Air Ballooning' and his associates did
experimentation with high atmosphere balloons on the Bruning Base. On October 22, 1960 Ed flew
the First Hot Air Balloon off the Bruning Field. There is a State Historic marker on highway 4 about 7
miles east of Bruning, telling of the Bruning Army Air Field and a keystone blue Georgia granite
marker telling of the first manned Hot Air Balloon ascension. Hot air balloonist have come from coast
to coast to pay tribute to the man who invented the hot air balloon. The Balloonist hope to make this
an annual event commemorating the First Hot Air balloon flight off the Bruning Air Field and making
Thayer county the 'Balloon capital' of Nebraska.

Three monuments grace the grounds of this country school, a red granite Oregon trail marker, with legend inscribed on it;

This scenic area east of Alexandria encompasses 1,769 acres of park and wildlife lands including 47 acres of water. The lakes have recently undergone reconstruction and renovation and should offer some fine fishing opportunities.

The modern campground offers 36 sites with 30

Two counties in southeast Nebraska are bisected by one of the nation's oldest highways - US 81, also known as the Pan American Highway. Thayer and Fillmore counties serve as part of the 17,000

Hebron, NE One Of A Kinds