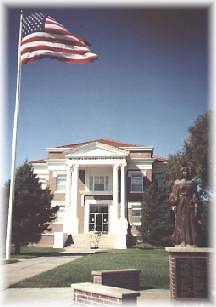 Our county, Wichita, named for a tribe of Indians, was organized in 1885. The first settlers of Wichita County, were stockmen, who were attracted by the wide open stretches of land covered by a dense growth of buffalo grass. John Edwards was one of the first stockman to arrive. He was elected the first sheriff of the county, but was shot by a young cowboy in a saloon.

It was a wild western custom to make young "greenhorn" cowboys dance by shooting at their feet. This cowboy resented this and the result , whether accidentally or purposely, was the sheriff lost his life. The cowboy was not punished as the sheriff lived long enough to ask that the boy not be punished as he was defending himself.

At one time almost every quarter section was occupied by a "homesteader," but many became discouraged because of the hardships of pioneer life. For those who stayed with the land, the better life all who came had dreamed of has come true. From the heart of the Great American Desert to mile upon mile of waving fields of grain and beautiful homes. None of this would have been ours but for those men and women who loved in dugouts and sod houses asking no more from the land than they gave. But perhaps then as now, the clean pure air, the beautiful sunsets, and the closeness of the stars made it all somehow worthwhile.

An effort has been made to compile records on all known cemeteries and single graves that are known to exist in Wichita County. We have a database on computers in the research room with names of people buried in the cemeteries. For a descriptive listing of 14