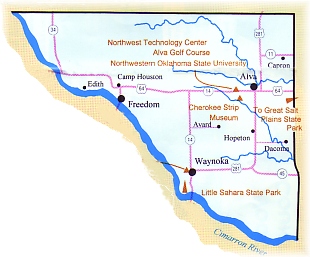 Woods County is located two counties east of the Oklahoma panhandle along the northern border of the state with the Cimmaron River forming it's southern border making it easily recognizable as being triangular in shape.

At the western edge of the county you'll want to visit the bigger-than-life community of Freedom where the cedar-fronted buildings on Main street create the appearance of an early frontier community. The town celebrates its Western heritage every August during the Freedom Rodeo & Old Cowhand Reunion - thousands of authentic and would-be cowboys from across the state attend yearly.

In Waynoka you can rent a six-man dune buggy and driver to cruise the sands of 1,800-acre Little Sahara State Park. All kinds of off-road vehicles are welcome here, and there are campgrounds for overnight trips.

Alva, the county seat of Woods County, is proud to be the home of Northwester Oklahoma State University and enjoys the diverse programs offered throughout the year. The Cherokee Strip Museum displays historical exhibits about the Cherokee Outlet as well as German artifacts from a POW camp south of town.

After the Civil War, when the cattle drives began, the cattlemen found the Outlet a good place to graze and keep the cattle on their way to market. In 1883, a Cherokee Strip Livestock Association was officially incorporated to deal with the Indians. This resulted in a five year lease with the Cherokees for $100,000 which was renewed in 1888 for $200,000. however, On February 17, 1890, President Benjamin Harrison issued a proclamation forbidding further introduction of cattle into the Outlet and ordering the removal of all cattle, buildings and fences before October , 1890, a deadline later extended to December 1, 1890. Apparently, sometime after this and before the "run," the entire Outlet was fenced to keep cattle out of the Outlet. The preferred barbed wire was, apparently, Scott's Arrow Plate, some of which may still be found in fences on the Kansas-Oklahoma border.

By 1890, the Outlet had been surveyed and divided into counties given the designations of K,L,M,N,O,P,and Q. The people were allowed to choose the name at the first general election held November 6, 1894. The Republicans chose the name Flynn. The Democrats chose the name Banner. The Populists won the election and chose the name Wood after a noted Kansas pioneer, Colonel Sam N. Wood. Through a clerical error the name was recorded as "Woods" instead of "Wood."