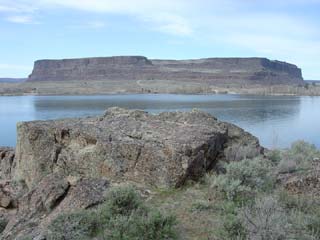 Banks Lake, part of the Columbia Basin Project, was created by building two rock-faced, earthfill dams at the north and south ends of the Ice-Age channel of the Columbia River, now known as Grand Coulee. The reservoir is 27 miles long with 27,000 water surface acres. The surface of Lake Roosevelt is several hundred feet above the original Columbia River, making it easier to pump water 280 feet up and out of the river's canyon into the adjacent Grand Coulee. Banks Lake National Wildlife Refuge contains a variety of habitat types including 1,500 acres of marsh, 1,549 acres of cypress swamp, and 1,000 acres of open water.

Steamboat Rock is a long-established area landmark, first used by nomadic Native American tribes and then by early settlers. The military currently uses the area for aircraft flying training missions. The basalt butte rises 800 feet above Banks Lake. It was once an island in the Columbia River bed. When the Columbia returned to its natural course, after centuries of being dammed by ice, the massive rock remained.

There is also a well-engineered road, built in the late 1800s, that winds through and up the south side of Northrop canyon. Once used by stage coaches and freight wagons, it was named after one of the original homesteaders.