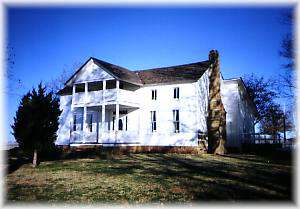 The log-walled, two-story home where Will Rogers was born in 1879 is located on the four hundred-acre ranch with barns and longhorned cattle. Self-guided daily tours are available at the house with a recorded message by Will's youngest son Jim Rogers. Group tours can be arranged by appointment. The ranch is operated by the Will Rogers Memorial Commission.

The birthplace is open daily, year round. RV hookups are available on the ranch grounds.

Will Rogers climbed to the top in every field he entered ... from Wild West shows to Vaudeville to Hollywood ... from newspapers to magazines to radio to movies. The humorist was easily the most popular and best-loved American of his time.

The ranch was given to Oklahoma in 1959. The house was moved up the hill when Oologah Lake was filled. Amish craftsmen built an era-correct barn in 1993 as part of the process of establishing a turn-of-the-century living history ranch on the site.

Now, majestic longhorn cattle again graze the rich pastures, just like they did in Will's childhood. As would have happened more than a century ago, ranch visitors are as likely to be greeted by a lamb, a goat, a goose or even a peacock as they are by a longhorn. It's a special treat for city kids never really exposed to farm life before.