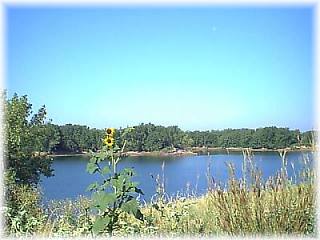 Elwood Reservoir was formed in the late 1970s as part of a project to rehabilitate and modernize Central's E65 irrigation canal system. The lake was created by damming one end of a series of canyons. Water from the E65 Canal is pumped into the reservoir each spring to supplement flows in the canal for irrigation. The reservoir's level falls each summer as the irrigation season progresses, but the lake is partially filled each fall after irrigation season ends.

The reservoir's boat ramp was designed to remain in service even at lower lake elevations. There is a 5-mph (no wake) speed limit for boats over the entire lake. The only access to the lake is from the east off of U.S. Highway 283. Once on the lake, fisherman can choose among dozens of coves within the lake's 1,300 surface acres (at full pool) to cast their lines.