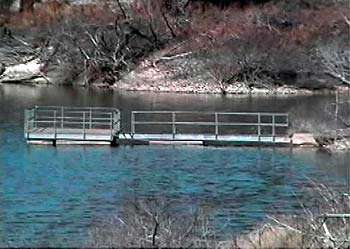 Lake Georgetown contains a high density largemouth bass population. The size structure of this fish population has been improving since the implementation of a 14 - 18 inch slot length limit in September 1993. Several catches of largemouth bass over 10 pounds were documented in 1999 and 2000. A moderately low-density smallmouth bass population seems limited to the lower end of the reservoir. The reservoir also has a good white bass population with runs occurring up the North Fork of the San Gabriel River in the spring (February-May). Hybrid striped bass have been stocked annually since 2003. A fishery for this species will develop in coming years. Lake Georgetown also supports a low-density white crappie population. Blue, channel, and flathead catfish are present in the reservoir.

Largemouth bass anglers have their best success on this reservoir during the spring and fall. During the hot summer months, largemouth bass anglers will experience greater success fishing at night. In the lower section of the reservoir where the water generally remains clear, topwater lures, metal flake willowleaf spinnerbaits, and shallow- to medium-depth crankbaits work well along rocky banks. Do not be surprised to catch a few smallmouth bass using this technique. In mid and upper sections of the reservoir, casting jigs, soft/hard jerkbaits, and spinnerbaits to wood or rock cover might bring strikes from hungry largemouth bass.

There are several areas recommended for bank fishing. A fishing dock is provided in the picnic area and campground at Cedar Breaks Park and near the boat ramp at Jim Hogg Park. Overlook Park has a great view of the Lake Georgetown Dam and up river of the lake. Black Bass is a popular fish to try from the banks of the overlook. Many fisherman try their luck at the stilling basin. It also provides an ideal location to access the San Gabriel River for a canoe trip or inner tube float during minor releases.