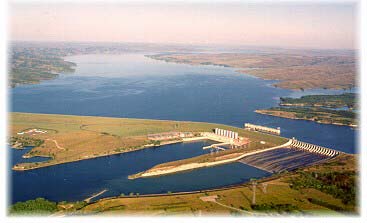 Lake Francis Case is situated on the Missouri River with numerous tributary streams and their embayments bordered by rugged bluffs broken by a complex of eroded canyons and ravines which afford protected boating and fishing sites.

The Lake Francis Case area has become one of the most popular recreation spots in the Great Plains with opportunites for camping, picnicking, boating, water-skiing, swimming, fishing, nature watching, and sledding. Hunting is allowed outside recreation areas. Established below Fort Randall Dam is one of the first refuges in the United States maintained specifically for bald eagles. This area is along the Lewis and Clark route.

Fort Randall Dam lies within view of the military post from which it takes its name. The name of the original fort honored Colonel Daniel W. Randall, one-time deputy paymaster of the Army. The reservoir behind Fort Randall Dam, which is named after the former South Dakota Representative and Senator, Francis Higbee Case, extends 107 miles upstream to Big Bend Dam near Fort Thompson, South Dakota.