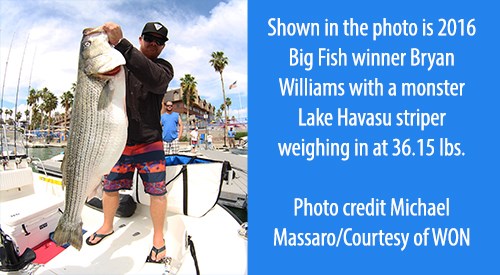 Lake Havasu's deep water, fringed with coves and inlets, provides ideal fishing conditions for black and striped bass, crappie, bluegill, catfish and trout. Through a multiagency fishery enhancement program, artificial habitat is being developed to increase the game fish population, and additional shore access is being constructed for fishermen around the lake. Lineside bass can be found in schools around the Parker Strip. Some of the best fishing is toward the south end of the Lake in the Bill Williams Arm.

Seven isolated coves in Lake Havasu have also been set aside for biologists to raise populations of 2 endangered native fish -- the bonytail chub and razorback sucker. In these predator-free coves, small spawn of these species are raised until they reach about 12 inches in length -- large enough to escape the predatory game fish. They are then tagged and released into the lake to help expand the populations of these endangered fish and reduce the threat of extinction.