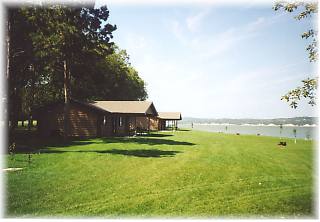 Nebraska's second largest lake, Lewis & Clark straddles the northeast border with South Dakota, about 7 miles north of Crofton on NE Hwy 121 in the northwest corner of Cedar County. The lake stretches for some 35 miles at maximum pool, with 90 miles of shoreline. Maximum depth is 45 feet. It draws its name from the Lewis & Clark Expedition, which camped nearby on their epic journey to explore the Louisiana Purchase. This Nebraska Game and Parks Commission state recreation area includes five areas on the south side of the lake - Weigand-Burbach, Miller Creek, Bloomfield, South Shore and Deep Water. Development on the recreation area began in 1957, not long after the dam was closed. Most recent developments, completed in 1997, involved a complete overhaul of the Weigand-Burbach area at a cost of some $3 million.

Niobrara State Park is located upstream near the confluence of the Missouri and Niobrara rivers. Bazile Creek Wildlife Management Area is near the river about midway between the upper lake and Niobrara park.

Cities Near Lewis and Clark Lake