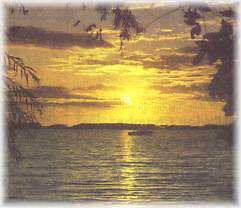 During the past few years the conditions for fishing have been excellent here because of unique conditions that occurred several years back. In the late 80s and early 90s there was a localized drought that caused the water level to be eight feet blow normal for several years, allowing a lot of vegetation to grow around the shore. When the rains and flooding of 1993 occurred, the water level shot up to eight feet above normal, so the lake experienced a 16-foot increase in a very short time. It was like a new lake had been formed, and the habitat for fish was prime, resulting in a boom fishing period.

The lake is most noted for its channel catfish, walleye, white bass and wipers. Black bass and crappie populations are good and improving . There is also a good population of truly lunker-size flathead catfish. An 18 inch limit is in effect for walleyes and black bass. A fisherman's parking area with fish attractors and fish feeders is located in Cottonwood Cove.