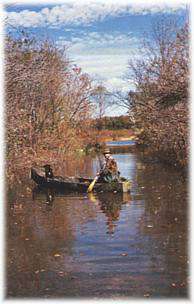 The following fishing tips should improve angler's success in catching the lake's more popular fish species. These suggestions are of a general nature and fishing conditions can change rapidly due to weather and water conditions.

Walleye concentrate along the face of the dam during early April to spawn. Following the spawn, Farnum Creek flat, the mud points near School Creek and the flats near the military marina are good areas. During the summer, walleye often are taken off the state park points in 25 to 40 feet of water.

Nearly all of the brushy and rocky coves contain crappie, but the coves around Rolling Hills and Curtis Creek are traditional hot spots. Autumn finds the crappie back in the same haunts as in the spring. Ice fishing in winter in the Curtis Creek area often yields sizable strings of crappie.

Milford usually produces a white bass run in the Republican River each spring in late April or early May. In years when the river is high and turbid, a spawning run occurs off the face of the dam, rather than upriver. In summer, the white bass can be taken while trolling deep-diving lures across underwater drop offs. During the hot summer months, night fishing for white bass under lanterns or floating lights is popular. One of the best places for night fishing is Madison Point and along both sides of the Wakefield causeway.

In general, any of the rocky points and banks in the lower half of the lake will harbor smallmouth, but the face of the dam has by far the highest density of this fish.