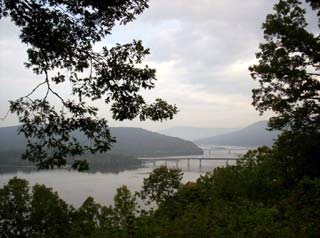 Nickajack Reservoir extends 46 miles upstream from the dam to Chickamauga Dam. With 179 miles of shoreline and 10,370 acres of water surface. the reservoir offers wide expanses of water and the spectacular scenery of the Tennessee River Gorge, known as the Grand Canyon of Tennessee. Boat-launching ramps and fishing berms are located on both sides of the river below the dam, and a concrete fishing pier is connected to the bank with footbridges and a wheelchair ramp. TVA camping and picnicking facilities are available at several locations.

Between late April and early October, nearby Nickajack Cave serves as habitat for roosting gray bats, an endangered species. At dusk the sky is darkened as thousands of bats emerge from the mouth of the cave.

Nickajack is the sixth step in the stairway of TVA reservoirs and locks that carry barges up and down the Tennessee. Some of the commodities passing through the Nickajack lock are grain, pulpwood, wood chips, soybean oil, salt, petroleum, steel products, and coal. Inadequate lock facilities at the old Hales Bar Dam, which Nickajack replaced in 1967, had long presented a serious navigation problem.