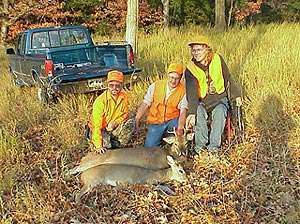 Truman Lake offers many opportunities for a variety of game. White-tailed deer, turkey, squirrel, rabbit, quail, duck and geese are favorites among sportsmen. Most project land is open to hunting in accordance with federal, state, and local laws, with the exception of developed parks, the project administration area, land leased to the Boy Scouts of America, the Lindon Q. Skidmore Wetland Management Area, and other designated refuge areas.

Truman Lake is located in an ecological transition area with Oak-Hickory forest to the east and prairie/farmland to the west. This diversity of land types creates a variety of wildlife habitat.

Waterfowl hunters can take advantage of several marshes located on the project. Contact the Truman Project for marsh locations.

For more than a decade now, the Warsaw Sunrise Optimist Club and the U.S. Army Corps of Engineers at Truman Lake have sponsored an annual managed deer hunt for persons with physical disabilities. The intent of the hunt is to provide persons with physical disabilities the opportunity to participate in the sport of deer hunting, and, thereby, help control deer populations in park areas. The managed hunt is limited to persons with permanent disabilities. Preference is given to those confined to wheelchairs and other ambulatory aids in the selection process; however, a random drawing will be employed to fill any remaining spaces.

In 1998, the Missouri Department of Conservation gave authorization for each hunter who participates in the Truman Managed Hunt to harvest two deer (only one of which may be an antlered buck). Each participant must purchase a "Managed Deer Hunt Permit", which is valid for both deer. Permit cost is $15 for Missouri residents and $145 for non-residents and is only available for purchase after an individual has been selected for the hunt.

Though the success of each year's hunt is mostly determined by new-found friendships and the good times shared by hunters, volunteers, and sponsors, it is also important to consider harvest success. The 1999 hunt set an all-time record for the Truman hunt with 23 deer taken. The 2000 and 2001 hunts were also quiet productive with 14 and 13 deer harvested, respectively.