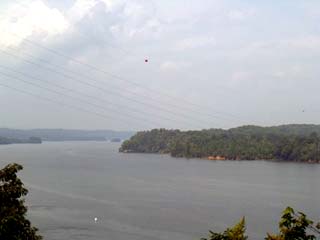 Watts Bar, located about midway between Knoxville and Chattanooga, is one of nine TVA dams on the Tennessee River. With 722 miles of shoreline and over 39,090 acres of water surface, the reservoir attracts millions of recreation visits each year for boating, fishing, swimming, camping, and other outdoor activities. A scenic overlook near the dam provides visitors with a panoramic view of the reservoir and surrounding countryside.

The dam was completed in January 1942, three weeks after Pearl Harbor, and provided urgently needed electricity for the war effort.

The lock at Watts Bar handles more than a million tons of cargo a year, and the reservoir plays an important role in flood control. In conjunction with other tributary and main-river reservoirs above Chattanooga, it is of special value to that city, which is the point of greatest flood hazard in the Valley.

Without the regulation these dams provide, Chattanooga and other downstream communities would have suffered several major floods and many smaller ones over the years that would have resulted in damage amounting to some $4.9 billion.