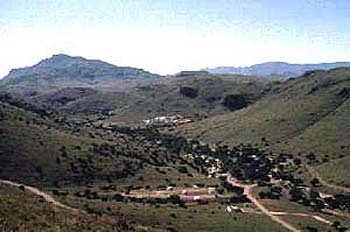 In a sloping basin among the scenic Davis Mountains, the 2,708 acres of the Davis Mountains State Park host more than 155,000 visitors annually. Located approximately halfway between Guadalupe Mountains National Park, Carlsbad Caverns, and Big Bend National Park, the original portion of the park was deeded to Texas Parks and Wildlife Department by a local family. Original improvements were accomplished by the Civilian Conservation Corps (CCC) in 1933, including the primary service facility, a multilevel hotel called Indian Lodge, patterned in the pueblo style.

The Davis Mountains, the most extensive mountain range in Texas, were formed by volcanic activity during the Tertiary geologic period, which began around 65 million years ago. These mountains were named after Jefferson Davis, U.S. Secretary of War and later President of the Confederacy, who ordered the construction of the Fort Davis army post. Most Indian bands passed through the Davis Mountains, although the Mescalero Apaches made seasonal camps. As west Texas settlements increased, raiding in Mexico and along the San Antonio-El Paso Trail became a way of life for Apaches, Kiowas, and Comanches. Few Americans had seen the Davis Mountains prior to 1846. After the war with Mexico, a wave of gold seekers, settlers, and traders came through the area and needed the protection of a military post - Fort Davis. Fort Davis was active from 1854 until 1891, except for certain periods during the Civil War. In 1961, the historic fort ruins were declared a National Historic Site, and a vast restoration/preservation program was initiated by the National Park Service.

Davis Mountains State Park Camping
The northern half of the park, north of State Highway 118, has been designated the Limpia Canyon Primitive Area, a special use area with a required fee. Currently, it includes 10 miles of backcountry hiking trails with primitive campsites, a secured parking area, and a host campsite.

Developed facilities south of State Highway 118 include restrooms with and without showers; campsites with water; campsites with water and electricity; campsites with water, electricity, sewer, and cable TV connection; a group picnic area with tables, an outdoor amphitheater (capacity 200 - no fee); picnic sites; a playground; an interpretive center (staffed by volunteers); 9 miles of hiking trails (not including the Limpia Creek Primitive Area); and a Texas State Park Store. Special rates are available. A self-registration station is available at the headquarters for visitors arriving after office hours and/or park host duty hours. Campsite availability and status information are posted each evening.

6 - Hike-in (4 miles) Primitive Campsites. 4 mile hike up a mountain, elevation change is 800 feet. No ground fires allowed. Pets are allowed in this area. Visitors park in the Limpia Canyon Primitive Area designated parking. The gate to this area stays locked, you have to sign in during office hours to get the gate combo. - $6 per 4 people.

33 - Campsites with water . Sites have a picnic table, fire ring, and/or grill. Not all sites have water, several sites must share. - $9.

34 - Campsites with electric and water hook-ups. Sites have a picnic table, fire ring, and/or a grill. All sites have 20 and 30 amp service. Drive lengths vary, some are double. Park requires vehicle lengths for these sites. - $13.

Seven miles of equestrian trails are located in the beautiful Limpia Canyon Primitive Area. Visitors must provide their own horses. The trail takes riders from a 4,900 feet elevation at Limpia Creek to over 5,700 feet at the scenic overlook. The terrain is rugged with excellent scenic views of the Davis Mountains. The Chinati Mountains, some 50 miles away, can be viewed toward the southwest.

On the slopes of the Davis Mountains within the bounds of Davis Mountains State Park, this rustic inn was built in the 1930s and modeled after southwestern Indian pueblos. The historic section of the lodge was constructed by the Civilian Conservation Corps (CCC) and features the original interiors and furnishings. In 1967, a major construction project was completed, including renovation of the original structure, which has eighteen-inch adobe walls, hand-carved cedar furniture, and ceilings of pine viga and latilla. It resembles a Southwestern Native-American-style, multilevel pueblo village. Indian Lodge was voted the #1 accommodation in Texas by readers of Texas Highways magazine in 1992.

Hike the Davis Mountains, visit the Fort Davis National Historic Site, relax by the swimming pool and have meals at the Black Bear Restaurant.