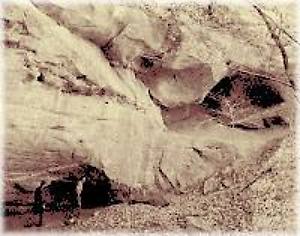 Nestled on the banks of the Missouri River on Nebraska's southeastern border, Indian Cave offers a wide range of outdoor experiences. Camping from RVs to tents, picnicking, boat access to the river, horseback trail rides, hiking, fishing, living history or communing with Mother Nature, all await at this exceptional 3,052-acre park. Indian Cave is particularly spectacular in the fall, when its 2,386 acres of timber are decked in autumn's best. And, developments here are designed to maintain the pristine nature of the area.

Indian Cave State Park is named for the huge sandstone cavity that is the main geologic feature of the area. Although its actual age has not been determined, it is possible that Indian Cave has existed for several thousand years. It is a natural formation, created by silt and fine-grained sand deposits in a Pennsylvanian rock channel. Petroglyphs or ancient Indian picture writings etched on the walls of the cave are the only known example of their kind found in Nebraska. However, their cultural origin and period in history remain a mystery. The petroglyphs depict forms, shapes, and scenes, most of the elements of nature, mostly wildlife. The cave, with its mysterious picture carvings, is easily accessible to park visitors. Unfortunately, many of the ancient petroglyphs have been obscured or destroyed by the later gougings of modern-day visitors. So, please help guard the fragile history of this unique spot and discourage anyone from defacing the sandstone. Approximately 300 feet south of the cave is a coal shaft. It was originally worked by a Mr. Deaver, who lived on the bottom ground and used the coal to heat his house. The coal was very poor quality.

Indian Cave offers camping at its finest. Two RV campgrounds can handle 134 units with 30 amp electrical hookups (22 of which also have 50-amp.). There are two Laundromats located at the showerhouses. Modern camping is open April 1 - October 31, even longer, if weather permits. Primitive camping is open year-round. The tent camping area extends among the scenic hills. Tenters have their own showers, as well as a water hydrant and 10 electrical hookups. Grills and ground-level fire rings are provided. There are Adirondack shelters along the trails for back-to-nature enthusiasts. For horse lovers, Indian Cave has a special camping area for those who bring their mounts to the park. All camping is first-come, first-served, and stays are limited to 14 days in any 30-day period. Group camping is available for organizations such as Scouts, church groups, etc.

For hikers, there are some 20 miles of trails. The north road trails are recommended for day hikers, since there are several picnic shelters, many tables, and toilets located along the way. The rest of the park trails are better suited to overnight users. However, hikers are welcome to explore any of the trails through the parks. Overnight backpackers will find several parking lots strategically located for their use. Adirondack shelters are situated on the ridges overlooking the park, while more, primitive campsites are located along the hiking trails. To accommodate large backpacking groups, there is a group camp area atop Rock Bluff Ridge. It has three Adirondack shelters, firerings, tables, and toilets. There is a water pump just a half mile away. However, large groups who want to use the group camp facility should contact the park office in advance of their trip.

Trails are numbered from 1-11 and range from easy to fairly difficult terrain. They are extremely popular with mountain bikers as well as backpackers. Trails No. 3 & 8 make up what is known as Rock Bluff Run, combining 3 miles of scenic vistas high above the Missouri River. An excellent 2 1/2 mile loop trail combines No. 9 & 10. Trail No. 9 offers a gradual climb to the top of the bluffs, then returns via Trail No. 10 which offers some spectacular views.

Equine Trails
Horseback riders will enjoy the trail ride through the park. Rides start at the corral near the St. Deroin Schoolhouse and cover about three miles. Tickets are available at the Booth and should be purchased early in the day. Park guests may bring their own horses to the park and ride the Hardwood Trail, which covers 11 miles of moderately difficult terrain. Primitive camping facilities are located at the trail head and can accommodate fairly large groups who call ahead to ensure its availability. The large picnic shelter in the area can accommodate meeting, family reunions, get-togethers as well as other park guests.

Boating
There is one boat ramp at the park, and bank fishermen find plenty of action from the mighty Missouri River for catfish, bass, bullheads, carp, and occasionally, a sturgeon. Three parking lots offer handy access to the river for anglers. For boaters, there is access to the Missouri at Brownville State Recreation Area, just 15 miles north of the park.

Winter sports are becoming increasingly popular at Indian Cave, with its picturesque and semi-rugged terrain. Some 16 miles of trails are marked for cross-country skiing, and the best snow cover usually occurs in January and February. Since park roads are closed during the winter, they offer some excellent sledding, as do several of the steep hillsides.