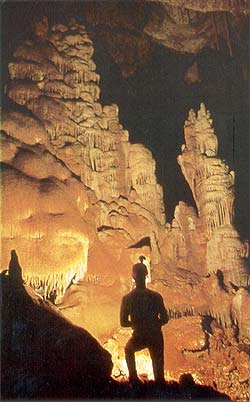 Kartchner Caverns is one of the world's best living caves and remains the anchor that draws the masses to the San Pedro Valley. The State Park, located on 550 acres at the foothills of the Whetstone Mountains just south of Benson, Arizona, offers picnicking, camping, hiking, walking, and the wonderful still-living caverns.

Discovered in 1974 by spelunkers, Gary Tenen and the late Randy Tufts, Kartchner Cavern's pristine cave of massive limestone was unveiled to the public on Nov. 12, 1999, with much fanfare and media blitz. Initially, tours of the Totunda and Throne Rooms were offered throughout the year. The Big Room has since been added for cave enthusiasts to enjoy from October through April. Late April the myotis bat returns from Mexico to give birth, transforming the cavern into a giant bat maternity ward deemed essential to the cavern's delicate environment. All three rooms give visitors close-up views of the beautiful, astonishing and still-growing formations.

On the tour you will discover the role water has played in the creation of Kartchner Caverns. You will see some of the tiniest, most delicate formations found in the cave, as well as the largest column in Arizona. This tour includes an up-close look at the variety of fromations and colors that makes this cave one of the Top 10 in the world.

The cavern's temperature stays at 68 degrees Fahrenheit at 99 percent humidity, ensuring that its life blood - water - percolates from its surface giving life to the still-growing formations.

Katchner Caverns is open every day except Christmas and has a shaded dining area, amphitheater, vending area and gift shop.

The Guindani Trail (#398), located on the east flank of the Whetstone Mountains in the Coronado National Forest, is 4.2 miles in length (first mile is an easy walk, next 2/3 of trail is moderate difficulty, and the last leg is strenuous). This is a shared-use, non-motorized trail that is well-marked with directional signs.

Elevations range from 4900' at the park trailhead to over 7000' in the summits along the crest of the Whetstone Mountains. The Whetstones are a fault-block mountain range with a variety of exposed geological formations. Vegetation is mesquite-invaded Chihuahaun semi-desert grassland at the lower elevations and open oak-juniper woodland on the higher slopes.

The Foothills Loop Trail (loop) is approximately 2.5 miles, rated moderate to difficult. There are two access points, one at the northeast end of the Discovery Center parking area and one at the Hummingbird Garden.

This is a hiking trail, with no bicycles or motorized vehicles permitted. The trail climbs the limestone hill north of the cave and descends into the wash that follows the fault between the Whetstone Block and the San Pedro Block. A short spur trail at the upper portion of the Foothills Loop Trail leads visitors to the scenic Mountain Viewpoint.

Informational signs along the Foothills Loop Trail will discuss such trail highlights as the foothills, scenic view, riparian area, bedrock mortar and the Native Americans that inhabited the area.

The Hummingbird Garden Walk is located on the southwest side of the Discovery Center. The walk is lined with a variety of local vegetation. Some of the varieties include: Catclaw Acacia, Velvet Honeysuckle, Beargrass, Yellow Bells, Sandpaper Verbena, Black Spine Prickly Pear, Autumn Sage, Agave, Aloe, Desert Bird of Paradise, Indigo Bush, and Desert Spoon.

There are shaded ramadas and an outdoor dining area at the 23,000 square foot Discovery Center and six miles of hiking and walking trails.

The Discovery Center offers up-close experiences with the Caverns. It is surrounded by a 550 acre State Park and six miles of hiking trails. The grounds also feature a hummingbird garden.

Inside the 23,000 square foot Discovery Center there are numerous displays including replicas of various mineral formations. The Center houses the Kartchner Caverns Gift Shop.

One of the displays is a fiberglass replica of a Shasta ground sloth. The 80,000 year old remains of one such ground sloth were found in the Caverns.