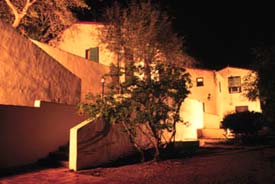 Oracle State Park is located in the northeastern foothills of the Santa Catalina Mountains near the town of Oracle. Ranging from 3,500 to 4,500 feet in elevation, the nearly 4,000-acre park consists of oak grassland, riparian woodland, and mesquite scrub habitats which contain a diversity of wildlife and plant species.

The purpose of the park is to act as a wildlife refuge and environmental learning center. Educational programs are being developed to focus on basic ecologic principles, and to enhance public awareness of the importance of safeguarding natural resouces.Although the land has been a park for just a short while, the area has been visited and used by man since prehistoric times. This interaction between man and the park environment has played an important role in shaping the landscape we see today.

Clovis Man occupied areas along the San Pedro River 10,000 to 11,000 years ago and quite possibly visited the current park site during these early times. It is also believed that the Hohokam resided in the relatively flat, grassy areas of the park and used the adjacent woodlands for hunting and food gathering some 600-800 years ago.

In the middle 1880's the Apache Wars had ceased in central and southern Arizona. This opened up large areas to ranching, farming, and the settlement of small towns.

In 1902 Neil Kannally arrived in Oracle from Illinois. Moving to the area for relief from tuberculosis, he homesteaded the land that would later become the park.

Later, other members of the Kannally family joined him. The ranch grew substantially over the next several years and eventually 1100 cattle grazed the land.

In 1976, Lucille Kannally, the last surviving family member, donated the land to the Defenders of Wildlife who later transferred the property to the State Parks Board.

Location: Located approximately 45 minutes from Tucson, East of the community of Oracle.