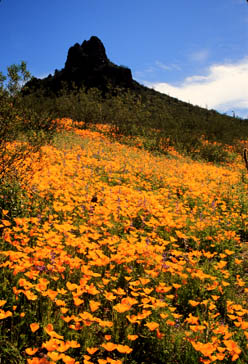 Picacho Peak was often used as a landmark by early explorers. During the 17th century, dedicated Jesuit priest Father Kino mentioned Picacho Peak in records of his journeys into Arizona, and in 1775, the DeAnza Expeditions passed by the Peak. In 1846, the Mormon Battalion, on their way to California to fight in the war with Mexico, constructed a wagon road through Picacho Pass. The forty-niners traveled the same road on their way to California, and in 1858, mail and passengers traveled this route via the Butterfield Overland Stage. This route is now used by the Transcontinental Railroad.

The most significant Civil War battle in Arizona took place near Picacho Peak on April 15, 1862, when an advance detachment of Union forces from California attacked a Confederate scouting party. The battle lasted for 1-1/2 hours, and three Union soldiers were killed. Every March, "The Civil War in the Southwest" comes alive again as over two hundred re-enactors converge on Picacho Peak on foot and horseback. Visitors enjoy viewing exciting mock battles that took place in Arizona and New Mexico during the Civil War. Also on display at the March reenactment are recreated military camps and living history demonstrations.

Hunter Trail: 2.0 miles; difficult; begins on the north side from Barrett Loop and goes to the top of the peak. The trail climbs a resistant path typical of the Sonoran desert. The route is steep and twisting, with steel cables (gloves are recommended) anchored into the rock in places where the surface is bare.

Sunset Vista Trail: 3.1 miles; moderate first 2 miles, becoming difficult; travels on the south side from the westernmost parking area and goes to top of peak.