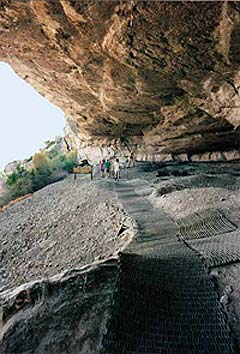 Fate Bell Shelter, located in the Seminole Canyon State Park, contains some of North America's oldest Indian pictographs and is one of the oldest cave dwellings in North America. The shelter is a huge cliff overhang containing some of the state's most spectacular American rock paintings.

Early man first visited this area 12,000 years ago, developing a hunting culture based upon large mammals, such as the mammoth and bison. No known evidence exists that these first inhabitants produced any rock paintings. By 7000 years, the region had undergone a climatic change that produced a landscape much like today's. They lived in small groups since the land would not support larger social units for long periods.

Despite the struggle for survival, some of these prehistoric people found the creative energy to paint the pictographs found in Fate Bell and other rock shelters of the Lower Pecos River Country. The distribution of this distinct style is limited to a district which includes a portion of the Rio Grande, Pecos, and Devils River. More than 200 pictograph sites are known to contain examples of their style of rock paintings ranging from single paintings to caves containing panels of art hundreds of feet long. Although numerous figures or motifs are repeated in different locations, the exact meaning of the paintings is buried with the people who painted them.

Facilities include the park interpretive center, a restroom with showers; campsites; picnic sites; and 8 miles of multi-use trails.

Location: 9 miles west of Comstock on US Highway 90

Seminole Canyon State Park Camping
Facilities at Seminole Canyon State Park include the park interpretive center, with exhibits relating to the history of the canyon area; a restroom with showers; campsites with water; campsites with water and electricity; picnic sites; and 8 miles of multi-use trails for hiking and mountain biking; and .6 miles of nature/interpretive trails; a Texas State Park Store; and a trailer dump station.