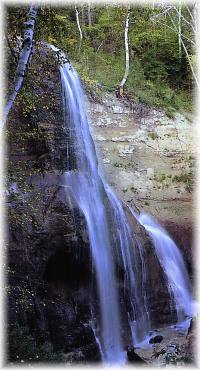 Although, many Nebraskans continue to look to other states for scenic wonders, increasingly they are finding them close to home. Many of the state's most picturesque spots are on private land, though, and remain as inaccessible as they were in Barbour's day. Smith Falls, 15 miles east of Valentine, is such a scenic natural wonder. Created where a small, spring-fed creek tumbles about 70 feet over a rock ledge to the Niobrara Valley below, it is Nebraska's highest waterfall. During the last two decades, canoeists have discovered the Niobrara River and Smith Falls, but Nebraska's highest waterfall remained largely unseen by the general public until 1996 when an old historic bridge was refurbished and placed across the river allowing foot access to the falls. Before, access was only by canoe or an old hand powered cable car. Surprisingly, only one other of the state's waterfalls is found on public land, the nearby Fort Falls on the Fort Niobrara Wildlife Refuge.

A Remnant of Ice Age Nebraska

Smith Falls is more than just a touris attraction, it is a naturally occurring biological museum. As the last glacier retreated north some 12,000 years ago, Nebraska's climate turned warmer and drier. Spruce and birch forest, which once covered the state, could not survive in this new climate and was replaced by prairie, except in the cool, wet canyons which feed into the Niobrara River east of Valentine. In these spring-branch canyons, remnants of the Ice Age fauna and flora persist. Protected from desiccating summer winds in the north-facing canyons, paper birch communities with an understory of northern grasses, sedges and forbs still thrive, 200 to 400 miles south of their modern-day range. At the foot of Smith Falls is a colony of unique trees, a hybrid of quaking aspen, a northern species, and big-toothed aspen, an eastern species.

Because of the Niobrara's striking scenery, recreational use and biological significance, a 70 mile segment of the river east of Valentine was designated a National Scenic River in May 1991. At the same time, a 25-mile stretch of the Niobrara, from the western border of Knox County to the Missouri River, was designated a Federal Recreational River. In a statement shortly after signing the scenic river bill, President George Bush called the Niobrara "an outstanding river resource."

Smith Falls SP Wildlife
Often referred to as the "biological crossroads of the Great Plains," the 30-mile stretch of Niobrara River east of Valentine, in which Smith Falls is located, is of great biological importance. Along the Niobrara, the ranges of closely related species of eastern and western woodland birds overlap, and some, like flickers, buntings, orioles and grosbeaks, hybridize much a big-toothed and quaking aspens once did. In the deciduous forests, an isolated subspecies of eastern woodrats is found 400 miles from its nearest relatives in eastern Kansas. In addition to the northern birch community found in the spring-branch canyons, four other distinct plant communities and their respective compliments of animal life merge there. Along the dry, sun-washed north valley wall, the Rocky Mountain ponderosa pine forest reaches its easternmost limit. Along the shaded, moist south valley wall, eastern deciduous forests of basswood, ironwood, black walnut and elm reach their westernmost limit. Mixed grass prairie is found on tablelands north of the river and on the north valley slope. And, to the south of the valley, is Sandhills prairie. In this relatively short stretch of Niobrara River Valley, 160 species of plants and animals are at the very edge of their distribution.

Smith Falls SP Historic Footbridge
Recognizing the biological and scenic significance of Smith Falls and the need for its preservation, the Nebraska Game and Parks Commission established the park in May 1992. Adjacent lands, including the springs which feed the stream forming Smith Falls, has since been included as additions to Smith Falls State Park. The 260-acre park will protect this biologically unique and scenic site, while at the same time allowing the public to view and enjoy the picturesque falls. Since protection of this distinctive site is vital, Smith Falls State Park will be unlike any other in the state. While public access to the area has been improved, human impact on site's natural features will be minimized. The south side of the river, where Smith Falls is located, will be maintained in its natural condition. A boardwalk along the path to the falls has already helped nature heal eroded areas. Hiking is limited to the established trails to prevent erosion and protect rare plants found there.

Smith Falls SP Camping
Apparently, Smith Falls was named for Frederic Smith, an early settler who filed the first homestead patent on the land in 1896. Until recently, Smith Falls and the unique plant community near it, were protected by its remoteness. During the last 20 years, as canoeing became ever more popular on the Niobrara River, and Smith Falls became more widely known, an increasing number of people have come to see the falls or camp nearby. This increased foot traffic, and years of cattle grazing on the area, has caused serious erosion, threatening the future of this biologically unique area. Fred Krzyzanowski, who purchased the land including Smith Falls in 1941, tried to accommodate swelling public interest by establishing a primitive campground and picnic area. Until his death in 1988, Mr. Krzyzanowski would often walk to the from his house to the campground nearby to visit with
campers.