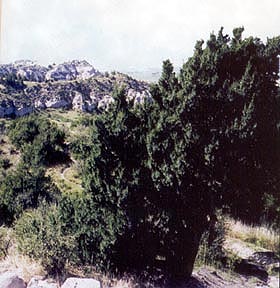 The Game and Parks Commission acquired the initial Wildcat Hills tract in 1929, and the picnic area and game reserve were built by the Civilian Conservation Corps (CCC) and the Works Progress Ad ministration (WPA) during the Depression era . Nearly all of the buildings and facilities on the area are built of native stone, quarried nearby. Wood for roofs, bridges and benches came from logs cut on the area.

The picturesque paths reveal a side of Nebraska that most people do not realize is there. Scenic vistas of rich pine-scented Ponderosas provide a perfect backdrop for a peaceful day in the woods. Wildlife such as birds and whitetailed deer and mule deer only add to the tranquility of the experience.

The 310-acre Big Game Reserve, south of the SRA, holds a small herd of buffalo, elk and sometimes longhorn cattle. Visitors are not permitted within the fenced reserve. The best opportunity to view the bison and elk occurs during the early morning and evening hours along the boundary fence. The number of animals kept on the reserve is limited by grass conditions, and some may be moved to other locations from time to time to maintain herd quality. The Wildcat Hills buffalo herd provided the start for the bison now raised at Fort Robinson State Park.

The game reserve is also home to a variety of other wildlife, including wild turkey, deer, bobcat and coyote. The boundary road paralleling the reserve fence on the east side ends at the Scotts Bluff-Banner county line, where there is a turnaround.

Hiking is a popular year-round activity at Wildcat. More than three miles of nature trails wind through the canyons and rocky bluffs, with four main trailheads and foot bridges on three trails. The primary trail is located below the large shelterhouse and is accessible to hikers of all ages and abilities. However, some of the side trails have steep grades. Lowlanders should bear in mind that elevations in the Hills" approach 5,000 feet in some areas and the altitude can affect breathing and stamina. Foot bridges, a rain shelter add to the hiker's enjoyment. The interior access roads and park benches along the way of the foot trails provide excellent opportunities for crosscountry skiing when snow conditions are right.

Cross-Country Skiing - Pine-studded buttes and bluffs provide superb skiing opportunities for all abilities. Picnic shelters make excellent sites for a lunch break or rest stop. The fenced 385-acre wildlife reserve next to the rec area is closed, although the perimeter road makes excellent skiing for both novice and advanced skiers. A mix of open grassland and evergreen trees provide a picturesque setting that appeals to winter and wildlife photography buffs. Buffalo and elk roam the enclosure with sightings of wild turkey quite common. Bobcats are more secretive but may be spotted on rare occasions.

There is no water available so skiers should take along enough for their trip.

Wildlife and Flora - Whatever the time of year, visitors will find a variety of wildlife, including both mule deer and whitetails. Much of the recreation area is covered by stands of mountain mahogany (Cercocazpus), found only rarely in the Wildcats or the Pine Ridge in northwestern Nebraska. Mountain mahogany's flowers lack petals, but the plant's characteristic feathery plumes create a blooming effect in late spring, especially in the slanting light of early morning or late afternoon. Other prominent plants include yucca, cedar, currant, a variety of spring wildflowers and poison ivy.

Wildcat Hills Camping
Wildcat Hills Reacreation Area is primarily geared for day use and picnic outings. There is no designated camping area at Wildcat, although primitive camping is allowed on several grassed parking areas and at smaller, near-level sites along the interior trail roads. The "summit" access road is not accessible for large RVs, vehicles towing larger camping trailers or boat trailers, since the turnaround is extremely sharp. That road entrance is well-marked.

A playground with swings, teeter-totter and merry-go-round is located below several picnic sites on the east access road. Most of the picnic sites are in the North Platte River Valley. After sunset, the lights of Scottsbluff, Gering and river valley farms add their sparkle to the dusk-reddened rock outcroppings.