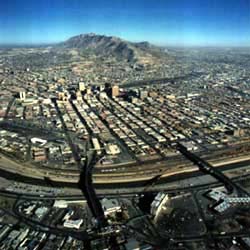 Franklin Mountains State Park, in El Paso County, was created by an Act of the Texas State Legislature in 1979. The Franklin Mountains form a striking backdrop to the City of El Paso and constitute an area of statewide ecological and aesthetic significance. Making the mountains a park for the protection of their natural features and enjoyment of the public has long been a dream of farsighted El Paso residents, as well as conservationists across the state and nation. The park is the largest urban park in the nation at 24,247 acres, covering some 37 square miles, all within the city limits of El Paso.

Overlooking the Rio Grande, the Franklin Mountains are the northern ramparts of the Paso del Norte (Pass of the North), leading from Mexico into what is now the United States. For thousands of years, native Americans, and for the last four centuries, soldiers, priests, traders, adventurers, gold-seekers, entrepreneurs, and just plain folk have passed through the gap in both directions in an endless procession of expansion, settlement, raiding, and conquest. Native American groups made the area home, using the plant and animal resources of the Franklins for more than 12,000 years, until their forced removal during the late 19th century. These people left their marks upon the rocks of the Franklins - colorful pictographs on boulders and in rock shelters and deep mortar pits (used to grind seeds) in rock outcrops near scattered water sources. Beginning in the 1580s, less than a century after Columbus, Spanish conquistadors and priests passed beneath the peaks of the Franklins on their mission to conquer and colonize the Puebloan villages in present-day New Mexico.

A limited number of tent camping sites are available. There are two types of campsites; one type (walk-in developed) is traditional, in that tents are placed directly on the ground and have tables and grills. The park has recently established an area with 5 self-contained RV sites(no water or electric hookups). All potential campers should be forewarned; there are no ground fires within park boundaries.

A $1.7 million face lift shared by the Texas Parks and Wildlife Department and the Texas Department of Transportation renovated old picnic sites, built additional ones, and built new rest rooms meeting ADA access standards. Each of the 44 picnic sites offers a shade roof, picnic table, and barbecue grill. Grills are for charcoal use only; guests may not use wood or dried native vegetation. The former gravel parking areas were paved to allow greater public access.

The Tom Mays section of the park is the public day use area for the park. It has shaded picnic/barbecue sites, self-composting toilets, several miles of gentle hiking trails through the foothills of the Franklins, and primitive camping (tents only). Be sure and visit the Park Store.

Mountain biking, camping, rock climbing, and horseback riding trails have been recently introduced in the park. The park features 118 miles of multi-use trails.