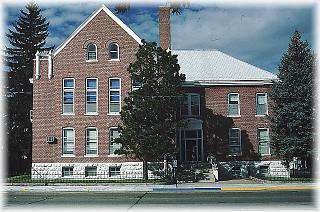 Although Cherry County is the largest county (in square miles) in Nebraska, early settlement did not occur until
the late 1870s. By the early 1880s, however, settlement began to increase spurred on, in part, by the
construction of the railroad. In 1883 Cherry County was organized. The following year Valentine, the county
seat, was incorporated. Initially, the county rented office space in Valentine. In 1900 voters approved a bond
issue to finance the construction of a courthouse. Events moved quickly thereafter and in November 1901 the
courthouse opened its doors. The building is listed on the National Register of Historic Places.