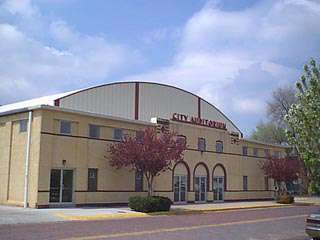 With the building of the city auditorium in 1916, Holdrege became the entertainment center for south central Nebraska and north central Kansas. Great artists of the day appeared regularly and quickly established the reputation for outstanding shows. Later, famous bands -- Guy Lombardo, Tommy Dorsey, etc. -- were featured. Not all band leaders felt a town of 3,000 could meet their "guarantee." However, crowds of 2,000 and more were not uncommon.

In the 1930s, during a visit by the Philadelphia Philharmonic Symphony orchestra led by Leopold Stokowski, a sudden rain storm revealed that the roof -- parched by years of hot, dry winds -- had developed many leaks. Orchestra members who had spent a relaxing day riding bicycles and viewing farm life (a first for many of the musicians) graciously moved to a dry spot and continued the concert. The sell-out crowd refused to let a little dampness spoil the concert and a good, although embarrassing, time was had by all.