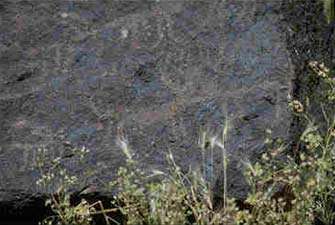 The Hedgpeth Hills petroglyph site, listed on the National Register of Historic Places, has over 1500 petroglyphs on nearly 600 boulders in a 47 acre nature preserve. The petroglyphs are believed to be several hundred to a few thousand years old. Archaeologists believe that Archaic, Hohokam, and Patayan peoples made the majority of the petroglyphs, and their meanings and the reasons they were made remain a mystery to us today.

Although some Indian peoples have known about the petroglyphs at Hedgpeth Hills for thousands of years, non-Indians have only known about this site since the 1800's, and it remains a sacred site to some Arizona tribes today.

Rock Art is a term used for designs made on rocks or on the earth's surface by people in the past. Petroglyphs are designs made by carving or scratching away the dark layer of rock varnish on a rock's surface to reveal the lighter rock underneath. Rock varnish is a thin layer of tiny clay particles which are deposited on rocks in desert environments. These clay particles are attached to rock surfaces by bacteria that lives there. Manganese in the clay gives rock varnish a dark color. In time, the color of the exposed interior becomes more like the color of the surface because of the rock varnish's regrowth.

Pictographs are designs made by painting on rocks or in caves. Colorful plants and minerals were ground up and mixed with protein based liquids such as egg, blood, or urine to make different colors of paint. The pigments were applied using sticks, brushes, fingers or hands.

Rock Art was made by people all over the world. Much of it was made by prehistoric people. American Indians made most of the rock art in North America.

The Deer Valley Rock Art Center opened to the public in December of 1994, and is associated with the Department of Anthropology at ASU. The museum offers interpretive exhibits and videos along with group tours and a gift shop.