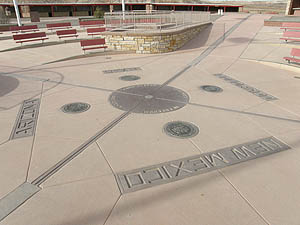 At the only point in the United States where four states converge, visitors experience the rarity of the Four Corners Monument - and the photo-op of occupying four states at once. A bronze disk embedded in granite designates where New Mexico, Arizona, Utah and Colorado meet. Many states share tri-points, but Four Corners is America's only quadripoint.

In the early settlement of the eastern states, boundary lines often followed human activity and the way people used the land. Otherwise, boundaries typically are drawn straight, such as at Four Corners, where the land was largely unsettled in 1848 when Mexico ceded the vast Southwest territory to the United States. In 1863, Congress approved a map with straight lines running east to west and north to south, creating a quadripoint to be shared by four eventual states.

The monument is located near Teec Nos Pos, Arizona, and is managed by the Navajo Nation, which charges admission of $3 per person. The Visitor Center is open year round, and features a Demonstration Center with Navajo artisans. Navajo vendors sell handmade jewelry, crafts and traditional Navajo foods nearby.

Picnic tables and self-contained restrooms are available. Services and accommodations are very limited to small cafes, grocery stores and self-service gasoline stations within a 30 mile radius.