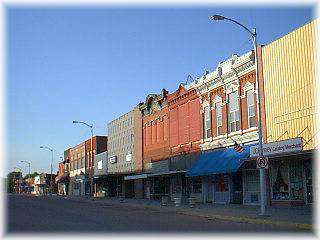 Downtown Superior has been designated a National Historic District. Several of the storefronts have been restored to their original appearance or redecorated to accentuate the Victorian motif. The designated area covers four square blocks and is representative of business districts from 1883 to 1937. Basic elements of several buildings are still evident, including a cast-iron building with a steel facade which is rather rare in Nebraska.

Laid out in 1875, three buildings were built that year, two businesses and a schoolhouse. By 1877, there were six business buildings and a population of 150. Two years later, in 1879, Superior was incorporated as a city. Lady Vestey's father Hans O.T. Brodstone, was a member of the trustees. Buildings started turning from wood to brick by 1880 as news of the approaching railroad reached town. Railroads have always been, and still are, an important part of Superior's economic stability and financial growth.