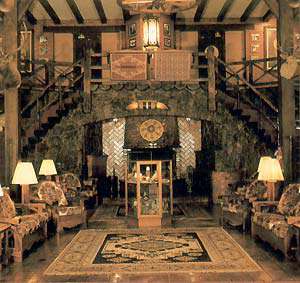 Formally opened December 17, 1937, The El Rancho Hotel was built by the brother of the movie magnet, D.W. Griffith. Drawn by the many films made in the area, Movie Stars including John Wayne, Katherine Hepburn, Spencer Tracy, Errol Flynn, Kirk Douglas, Gregory Peck, Humphrey Bogart and numerous others were among the many stars listed in the guest register.
In addition to Movie Stars, numerous Political Figures have stayed at the El Rancho including two Presidents: President Reagan and President Eisenhower. Autographed photos of the stars, Navajo Rugs & mounted trophy animal heads adorn the magnificent two story open lobby with its circular staircase.

The hotel is now protected by the National Historic Preservation Society. This historic hotel is continually cared for by Mr. Armand Ortega who has made it his personal hobby since its purchase. The hotel is decorated and furnished in the Old West rustic style. It is constructed of original brick, ash tar stone, and huge wooden beams with a pitched wood shale roof. The large portico overlooks the entrance and reflects the Southern Plantation style. Entering through the solid wood doors, one views the grandeur of the lobby. The floor is brick, inlaid in a basket weave pattern, and the light fixtures are made of stamped aluminum. The stone fireplace cove is surrounded by handmade wooden staircases that spiral to the second floor balcony. The balcony encircles the lobby and displays original photos of the hotel and many autographed pictures of the Hollywood stars. Mr. Ortega has recaptured the hotel's splendor and charm of yesterday.

During El Rancho's hey day it was a base for crews and stars on location because of its access to western landscapes and the rustic elegance of the hotel. El Rancho's elegance included superior service and food of Fred Harvey-trained personnel, accommodations for roughing it in comfort and gaming tables and liquid refreshments in the tradition of the Old West.

Stars arrived in Gallup in the insulated atmosphere of Sante Fe Railway trains. But soon they learned about the frontier in a journey to the El Rancho by wagon, carriage or buggy that met every Santa Fe passenger train. Chauffeur driven limousines arrived from Hollywood on Route 66 for use in the daily trips to the filming locations.

Although Gallup citizens mirrored the nationwide awe of Hollywood idols, direct contact in a hometown setting created a more natural relationship. The local population worked as stand-ins, extras, location employees, delivery boys, guides, stock suppliers and interpreters. Retailers sold everything from toothpaste to Indian jewelry, including, of course, proper cowboy hats. And Gallup become a working holiday away from the Hollywood image. And the distance from radio's Walter Winchell meant no gossip of their lapses from idolized stardom.

El Rancho was linked to Hollywood and the movie industry from 1940 through 1964. By 1964, the lure of the western hero was fading. Brilliant technocolor vistas were replacing dramatic, stark images in black and white. The mysterious west by that time was readily available by automobile along Route 66 and the almost completed Interstate 40.

Hollywood's interest in western drama is like the title of the 1989 film shot in Gallup, "Enid is Sleeping." However, Armand Ortega's restored Hotel El Rancho is once again duplicating the star studded years. But this time the stars are travelers along Route 66.

*** The El Rancho Hotel was headquarters for the following movies filmed in the area: