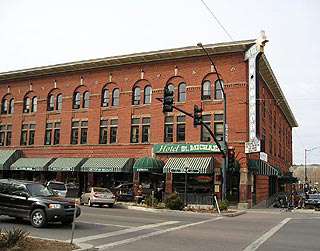 The cornerstone of historic "Whiskey Row," Hotel St. Michael, listed on the National Register of Historic Places, represents the coming of age of Prescotts hostelries. Constructed on the site of the modest Hotel Burke, which burned in 1900, the new three-story hotel was designed by D.W. Millard in the Second Renaissance Revival Style. Built of brick and stone, it is decorated with stone faces or "gargoyles," which allegedly represents crude images of local politicians.

The Hotel St. Michael is an excellent example of early twentieth century western style accommodations in Prescott and today presents a reminder of Precott's colorful historic past.