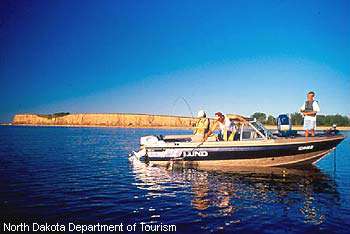 Fishing remains the primary activity on Lake Sakakawea. The big lake offers a wide-range of sport fishing. Cold water species include Lake, Rainbow and Brown Trout and Chinook salmon. Walleye, sauger and the cross, Saugeye, give anglers lots of action as do the giant northern pike in Sakakawea. Pan fishermen can catch good numbers of large crappie and perch.

In low water years of the late 1980's and early 1990's work was completed on construction and extension of boat ramps on Lake Sakakawea. There are sufficient numbers of ramps available for public use to eliminate congestion. Some dozen ramps insure access at least every five miles on lower Sakakawea and every 15 miles on the upper reaches within McLean County.

June-August: From Garrison Dam to the Little Missouri Arm

Spring: Best at Ice Out Upper ends of all the large bays

August-October: Near the face of the dam
August-September: Boat fishing is best
October: Shore fishing is good