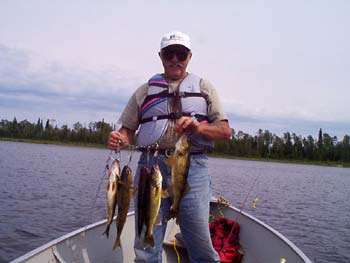 Fishing activity peaks at different times in different areas on Lake Sharpe. Fishing usually takes off in the upper region, near Pierre, and then progresses downstream to the lower third of the lake. Walleye fishing in the Pierre area is usually best in the spring and fall. In June, fishing improves in the lower third of the reservoir and remains good throughout the summer.

For Lake Sharpe, fishing patterns develop due to the reliance of walleyes and other fish on young gizzard shad as food. In the spring, with shad numbers are low, walleye are easier to catch. In the summer, as the shad become large enough for walleye to eat, walleye are harder to catch because they have full stomachs. In the fall, walleye become more catchable as the walleyes migrate upstream and concentrate in areas of Lake Sharpe and as the water cools walleyes become more active striking anglers lures.

The smallmouth bass population is in the process of maturing into an excellent and important fishery in South Dakota. The Lake Sharpe smallmouth bass fishery is beginning to attract anglers from across the Midwest who enjoy fishing for this great sport fish.

The tailrace area below Oahe Dam is well known for trophy trout fishing. Fishermen commonly catch large trout in the marina next to the tailrace during the winter and spring and in the tailrace throughout the year. In April, catchable rainbow trout (9 inches long) are stocked in the marina. This provides an excellent angling opportunity for everyone, especially children, the elderly, and disabled individuals. In 2006, a stocking of trout will also be made in April near the LaFramboise Causeway near the city of Pierre fishing piers to provide an easily accessible place for children to fish for trout. Catchable trout that survive past the first spring, can grow to a large size in the Oahe Dam tailrace, adding to the number of large trout available to anglers.

Catfish are found throughout Lake Sharpe. They are abundant but overlooked by most anglers. Lake Sharpe catfish average 15 inches in length. Shore fishing with live, cut, or stink bait is especially effective and can be extremely fast during the summer months.

Walleye
When: Early May to late June; mid September through November
Where: Tailwater, Lake Sharpe