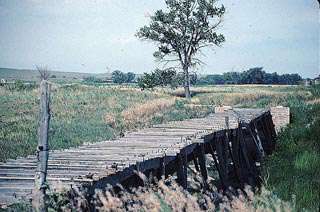 The Kimball County Irrigation District Board held its first organizational meeting in November 1909. Subsequent meetings resulted in plans for an irrigation system. The design of the canal called for a reservoir, and a north and south ditch. Because of the rough topography a number of aqueducts were required. The aqueducts used on this canal are of particular significance because the flumes used in them were manufactured in Kimball by Patrick Maginnis. He began building flumes used in aqueduct systems in the late 1890s, but his initial attempts resulted in crude and expensive products. After additional refinements, however, he developed the Galvanized Steel Flume that was patented on May 20, 1902. Although there are other aqueducts in the region they do not retain the high degree of integrity of this aqueduct. Listed on the National Register of Historic Places, it is an exceptionally well preserved example of a type of early twentieth century engineering that was essential to the irrigation system in areas of rough terrain.