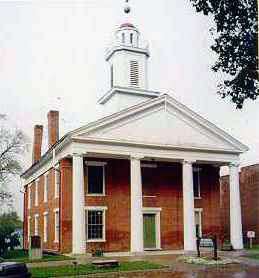 Built in 1845, this building served as the center of county government until the county seat was moved to Eureka in 1896. It is one of the two surviving courthouses on the historic 8th Judicial Circuit traveled by Abraham Lincoln.

The first floor of the two-story brick structure contains a central hall flanked by two exhibit rooms, one displaying artifacts of early local history, the other with exhibits describing the 1850s court system and Lincoln's life on the Eighth Judicial Circuit. On the second floor, the former courtroom and two small chambers are furnished to represent the era during which Lincoln practiced law.

Visitors may take guided tours of the building or view the rooms and exhibits on their own. A ten-minute video history of the building, which includes images and interpretation of the second floor, is available for viewing.