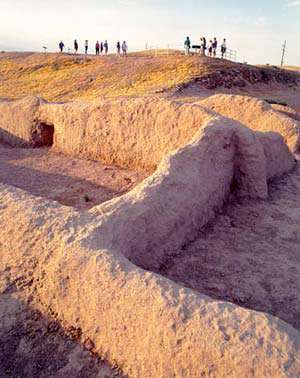 Pueblo Grande Museum is located at a 1,500 year-old Hohokam village ruins in modern day Phoenix. For over 70 years the museum has been dedicated to the study and interpretation of the Hohokam culture. On the 102 acre park grounds, visitors explore the ruin of an 800 year-old platform mound possibly used by the Hohokam for ceremonies or as an administrative center. An excavated ballcourt, and two full-scale reproductions of prehistoric Hohokam homes can be viewed along the ruin trail. The site also includes some of the last remaining intact Hohokam irrigation canals.

The prehistoric Hohokam people lived in central and southern Arizona from about AD 1 to 1450. They were expert farmers, growing crops such as corn, beans, squash, and cotton. They used adobe to construct their villages, often centered around platform mounds and ballcourts, and engineered hundreds of miles of canals to irrigate their fields. Distinguished by their red-on-buff pottery, the Hohokam wove beautiful textiles and made jewelry from shell obtained from the Gulf of California. Drought, floods and perhaps internal strife, forced the Hohokam to abandon the Salt River Valley in the fifteenth century. When Spanish explorers arrived in the sixteenth century, they found the Hohokam villages in ruins. However, they also found thriving villages of Akimel O'odham (Pima) natives, who claim to be descendents of the Hohokam. Pueblo Grande Museum and Archaeological Park is dedicated to increasing knowledge and understanding of the peoples of the Southwest, past and present.

The Museum's long-term exhibit hall, The Hohokam: The Land and the People, describes the fascinating life of the Hohokam people. This exhibit focuses on the Hohokam people of Pueblo Grande and the Salt River Valley. Several themes are contained in this fascinating exhibit including agriculture, canal building, craft production, trade and astronomy.

Doorways to the Past: Hohokam Houses, a exhibit along the Ruin Trail, features full-size replicas of Hohokam houses. Visitors are able to explore the everyday life of the Hohokam people while walking through an adobe compound and pithouse cluster. Replicas of Hohokam artifacts and other features give visitors the experience of entering the ancient world of the Hohokam.

Our Changing Exhibit Hall showcases up to three exhibitions per year on topics such as archaeology, southwestern cultures, and contemporary American Indian arts. In our hands-on exhibit, Explore Archaeology your children can discover the excitement of archaeology.

Don't forget to stop in at the Museum Store operated by the Pueblo Grande Museum Auxiliary. It's a great place to find that one-of-a-kind gift or personal item. Located off of the museum lobby you will find a wide variety of books, American Indian jewelry and pottery, games and books for kids, shirts, compact discs, cassette tapes and lots of other interesting items. Museum members receive a 10% discount on most purchases. There are many new items this year and all items sold in the store support the museum Auxiliary.