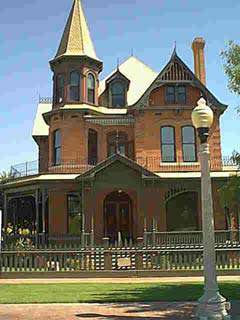 Designed in 1894 by Phoenix architect A. P. Petit, the Rosson House is an outstanding example of a Victorian architectural style named after Charles Eastlake. Purchased by the City of Phoenix in 1974, it has been authentically restored through the contributions of many individuals, groups and businesses. The House was entered in the National Register of Historic Places in 1971.

The expansive veranda has lattice-like ornamentation of lathe-worked posts and smaller spindles. First and second story windows are paired. The third story features an octagonal turret with elaborate finial and spool-like ornamentation. The interior of the House consists of ten rooms. Notable are the pressed tin ceilings, elaborately carved staircase, and parquet floors inlaid with oak, walnut and mahogany.

In 1882, Mrs. Rosson purchased Block 14, at 6th and Monroe Streets, from her sister, Mrs. Margaret Richardson, for $1,000. The neighborhood was becoming the most desirable and fashionable in Phoenix. The Rosson House, begun in late 1894, was completed in six months at a cost of $7,525.

The Rossons owned the house from 1895 until 1897 when it was sold to a Phoenix merchant, Aaron Goldberg. The property changed hands many times and was even converted to a rooming house. It was finally acquired by the City from Mrs. Ludwig Demmler.

Today, the Rosson House is the cornerstone gem of Historic Heritage Square inside Heritage & Science Park in downtown Phoenix, Arizona. Public tours of Rosson House are held Wednesday through Sunday. Tours are held on the half hour and last approximately 30 minutes.