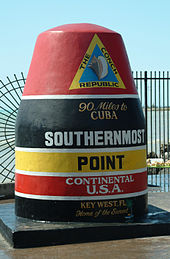 A painted concrete buoy, erected in 1983, marks the southernmost point of the continental United States. This landmark draws a million visitors a year mainly for the photo opportunity. The point was originally unnoticeably marked with a sign that was often stolen. The concrete buoy is actually an old sewer junction that was dug up in the area and found too heavy and large to move, so it was painted up to look like a buoy.

Florida\'s official southernmost point is Ballast Key, a privately owned island south and west of Key West that strictly prohibits unauthorized visitors. The marker in Key West gives something to the public as is evident as one of the most visited and photographed attractions in Key West.


Come visit us in Florida, Florida