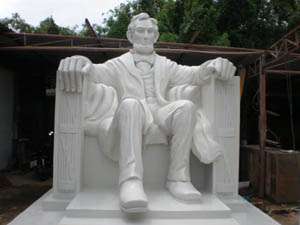 A 19-foot high statue of Abraham Lincoln will soon sit in a small rural town in Southeastern, Kentucky.

The statue was commissioned by Attorney Eric C. Conn. The statue took over a year to build at a total cost of over half a million dollars. The statue is scheduled to be put in place by a crane. It had to be delivered in three pieces due to the large size.

The public unveiling of the Abe Lincoln statue is set for Saturday, November 4, 2010 in honor of the first and only Kentuckian, Abraham Lincoln, being elected to the Presidency of the United States.

Attorney Eric C. Conn states that the statue's purpose is to remind Kentuckians that Abraham Lincoln was a Kentuckian. Lincoln himself wrote: "I too, am a Kentuckian."

The statue will be located on US Highway 23 in Stanville, Kentucky. The public may visit the statue 24 hours a day and admission is free.


Come visit us in Kentucky, Kentucky